Singing in the…. well, everywhere! 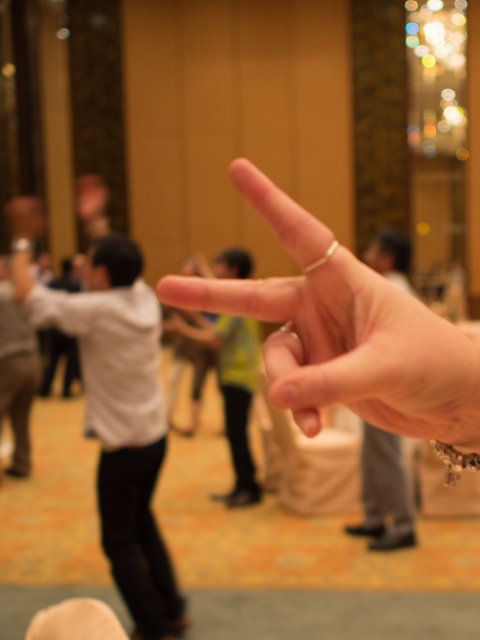 Well it’s about the people in your life again, isn’t it? To me, a song is a reminder of an event, an occasion, a person. I guess it often starts out as just something that sounds good, has a nice beat, makes you feel goof, but for me, I usually share it with someone and THEN it becomes something wonderful.

Today, for Writing101, I am asked to share with you my three favourite songs and why they are important to me. It’s a tough question because my favourite songs change with the seasons. If you asked me this question in a year’s time, I most likely will have a different answer. I tend to obsess with songs, I currently have a playlist of about 20 songs and i listen to them constantly, nothing else. In the car, when I’m at my desk, before I go to sleep. These three songs are on that playlist and they are based on my favourite people.

First up is Journey’s Don’t Stop Believin’. You know how you find a song that just makes you belt out the lyrics at the top of your voice whenever you hear it? This song is that song for me. My best friend loves the TV show Glee and this song featured on there. We took a road trip together last year, to a friend’s birthday party weekend, it was a 10 hour road trip and we had a playlist of songs that was a crazy eclectic mix. Whenever this song came on, we would sing along as loud as possible, such a happy happy time. The birthday weekend was fabulous, so much fun. And then, we had my birthday celebration (that I wrote about yesterday) about a month later and featured this song as well – we were all dancing around the heater and screeching this song, I don’t know what my neighbours thought. Actually, I don’t remember singing this song, I asked my friends the next morning if we’d skipped it somehow, but they assured me that I was out front, singing at the top of my voice – eek!

Next up is a song in a similar theme – Whitney Houston’s I Wanna Dance With Somebody. I left a toxic work environment in April last year (actually it will be one year next week). I’d been there for about 9 years and it had been wonderful, but the last few years were not great. I won’t dwell on that now. What was good was that I got to meet some fabulous people in that job and they are a few friends who I know I will have forever. Anyway, we had a company meeting every year, usually overseas, and last year was in Chiang Mai in Thailand. It was an exhausting schedule, filled with meetings and training and group exercises. The second last night was an awards night – a big fancy dinner, awards presentations, a group singing competition (don’t ask) and then (gasp) karaoke!! I don’t do karaoke very often, and I have to have the right people and the right number of drinks to get started. We did the usual songs, but then my friend tapped me on the shoulder and said “We’re doing Whitney”. Well, did we belt out this song?! Crazy – it was me and 4 guys, all of us geeky scientists, screaming out this song. It was hysterical. When we got home, I went through the photos from the night. My friend had stolen my camera and took snaps all night so I am in a lot of the photos. It was just two months later that I resigned from the job, so the photos look like my farewell party (I didn’t get one of those). It was a crazy night. Anyway, that song was also on the birthday party playlist and all of my friends and I belted it out together, it was exhilarating! I always think of my friend when I hear this song and I will usually give him a call for a chat.

Lastly, it’s Taylor Swift’s Style. I didn’t think this one would be on here. I mean, I love the song, but it’s not what I expected. It’s a new song, so it’s based on a recent experience. As many of you know, I recently spent two weeks at a conference in Melbourne. I was lucky enough to spend those two weeks with a good friend. He certainly doesn’t love TayTay but he humoured me for the two hour drive back to Melbourne. We listened to the radio for the remainder of the trip and since this song was so new, it featured quite heavily on radio. It became quite the running joke for us if an hour passed without hearing the song. One evening, in a cab, I was taking a quick phone call, and I noticed him humming a song while watching out the window. It was this song and he didn’t realise what he was humming. Of course I had to point it out! Again, hearing this song takes me back to that trip, it was a lot of fun. Plus, I really love this song 🙂

So, those are my three songs. How about you? Is there a song that means so much to you?

PS  The twist on today’s prompt is to create a writing practice, to commit to writing every day. I think I do this. Usually my posts are photo-based. After working all day, I usually have dinner and then spend an hour working up my blog posts. If I don’t get time during the week, I’ll put in a good chunk of time on the weekend.

27 replies on “Singing in the…. well, everywhere!”