I love macro photography, so when I went in to the kitchen to do the dishes this morning and I saw this poor little guy on his last legs, I took the opportunity to take some shots of him. There is one that isn’t very sharp, but I included it because he looks like he’s struggling to get up!

This photo is my 16th submission for the lovely Lucile’s Photo101Rehab. Please take a look at her blog and join in the fun!! Photo technicalities are listed on each photo. All were taken with my Olympus OMD EM5 and edited in Lightroom – just some lightning as well as increasing contrast and clarity. All photos are taken hand-held, which is why the ISO is so high (I had to use a slow shutter). 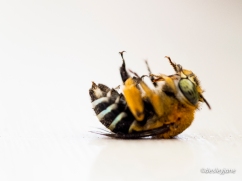 I saw on an episode of QI recently, that you can revive a bee by feeding it some honey, so I decided to try that. When I put the honey down, he struggled to get to it, so I nudged him to the pile and his little proboscis went to work sucking on the honey. When I came back a little later, he was belly-flopped in the honey pool. I was worried for his safety, so I scooped him out and put him back up on the windowsill. When I returned a few minutes later, he was gone! I like to think that he was fully revived and flew off to beeeeee with his friends 😉

As an aside, have you seen QI (which stands for Quite Interesting)?? It’s a British panel show, hosted by Stephen Fry. I love this show and have learnt many fun facts while roaring with laughter.