I am currently on day 8 of 14 away from home, at a conference in Lorne, Victoria. Lorne is on the Great Ocean Road, which, according to Wikipedia is an Australian National Heritage listed 243 kilometres stretch of road along the south-eastern coast of Australia between the Victorian cities of Torquay and Allansford. Built by returned soldiers between 1919 and 1932 and dedicated to soldiers killed during World War I, the road is the world’s largest war memorial. Winding through varying terrain along the coast and providing access to several prominent landmarks, including the Twelve Apostles limestone stack formations, the road is an important tourist attraction in the region.

I’d love to see the Twelve Apostles again while I’m here, but we aren’t going to get time. Erosion and time have worn away at a few of the apostles, and there are just 8 remaining.

In the meantime, I thought I would give you a little look at the lovely scenery surrounding me here at the beach – there’s not a lot of time between conference sessions, but we get an hour or two here and there to disappear and see some sights. 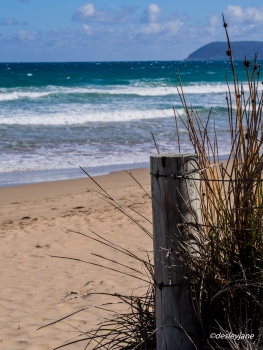 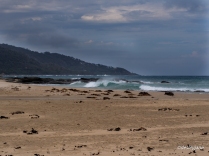 What do you think of my black and white header image? Should beach photos be black and white? I found the sky to be so pure and blue that it looked quite uninspiring without clouds. It was truly a glorious day, I even got sunburnt, but the sky looks dull without clouds. I don’t even think a graduated filter would have helped me in this situation.

Off for a wine, and some more views!