As some of you know, we’ve had a very stormy few weeks in Brisbane. I managed to be out in one recently and was able to capture some great storm clouds coming over the city – you can see them here if you missed them.

The days are hot, in the mid-30s (Celsius) and become very steamy. Usually our storms roll in at around 4pm and are all over within an hour, having moved on, usually towards north east. On Friday night, we had a big one and I felt like it was sitting right on top of my house. It was wild and windy, with rapid and consistent both sheet and streak lightning and cracking thunder. Gidget was petrified and hasn’t left my side since.

On Saturday, I was home all day and put the air conditioner on after lunch and settled in to watch a movie. Sure enough, at around 4:30pm, the clouds rolled in and the light brightened and the heavens opened up. When it was over, I switched off the air conditioning and opened up the house. The sun was setting and I noticed that the light was remarkably golden so I thought I’d head out with my camera and see if I could get a few shots. I’m pretty happy with the result 🙂 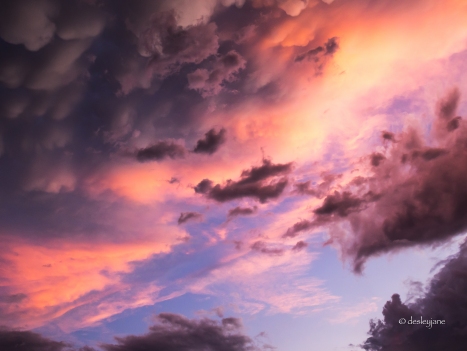 Sunset in the Clouds

Sunset after the Storm

The rain continues in the west, even after the sunset light faded out….

Rain in the Sunset

Rain in the West.

All taken with my Olympus OMD EM5 with the 17mm lens.
Let’s pop these into Lucile’s Photo101 Rehab Clinic.
x desleyjane

39 replies on “After the Storm”