We Queenslanders are quite used to crazy storms popping up out of nowhere and we’ve become quite good at predicting when a storm is going to happen. They can  be quite destructive so we have to be careful to keep safe. I think sometimes we get a little blasé about it, which can be dangerous.

Last week, I was driving home from work and thought I’d stop by my favourite spot to get a shot of the Story Bridge since it was looking a bit stormy. I didn’t have my camera with me, but I thought my iPhone would do the trick. Here are the shots: 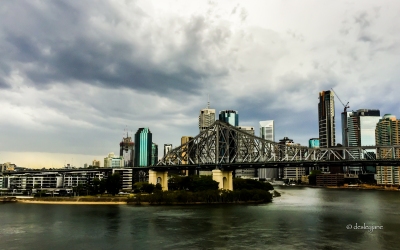 I’ve taken quite a few shots of this favourite bridge of mine before here and here.

Driving home from this location takes me via a spot called Kangaroo Point, which is a cliff that overlooks the city. Every time I drive along here, I want to stop and take photos but I’m either on my way somewhere and don’t have time or I’m on the way home and the traffic is bad, so it’s hard to stop.

This day however, I told myself, if there’s a car spot on the left (we drive on the left), I’ll take it and get some shots of the city and the storm clouds. Boy was I rewarded! The massive storm cloud was moving up from the south and then passing over the city, pouring rain over on the western side. 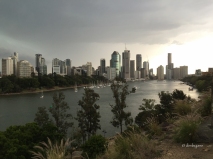 I was so engrossed in watching the clouds that I almost missed the signs. The temperature dropped and the wind really picked up, then the light went bright even though the sky was darkening. These are my signs. Plus the lightning was getting more frequent. So I snapped the last few shots and hightailed it back to the car.

The sky opened up and it started pouring rain, the wind was whipping the trees about, bits of bark and small branches were flying around everywhere, smacking into cars. It was crazy and probably the wildest storm that I’ve actually been out in. I’ve experienced much worse from the comfort of my own living room but I haven’t been out in one like this in a long while.

It was all over in about 20 minutes, and that’s another thing I love about Queensland, the storms are almost always quick. However, it meant my drive home took me an hour and forty minutes, instead of just the usual forty minutes.

While I probably should have been a little more careful, I absolutely don’t regret stopping.

For The Daily Post’s Weekly Photo Challenge: Careful. I’ve already posted some of these on Facebook and Instagram, but thought I would share them here. The storm was on Thursday, October 22nd, 2015.